PNC is changing its name. It feels like I’ve been talking about this for a million years (I know, slight overstatement!), but we are finally at a place to announce it. Important to note is that this change isn’t legal yet. However, that work is underway and we know it is time to begin facilitating the transition.

Just a wee bit nervously, I want to introduce you all to:

Community members were asked: what does PNC mean to you? The number one word used was “safe”.

A group of four people (Scott Boniface, Cynthia Leung, Joanna Rivard, and myself) gathered to distill the results and brainstorm ideas.

Scott Boniface of Playground Inc., a digital creative agency designed and presented a number of options, all on a volunteer basis. He is behind the beautiful logo: an aerial shot of the shape of Parkdale with two main arteries intersecting which look reminiscent of a cross.

After much consideration, Google and NUANS searches (to make sure the name didn’t already exist) and prayer, the decision was made.

For the record, I now know how hard it is to choose a name. I am so grateful to Scott for helping make the process as streamlined as possible. Thank you again to Scott + Joanna and Cynthia for making time for meetings and getting the creative juices flowing. Thank you to the Board. Thank you to my family (though I know Cate really wanted “blueberry” to be worked into the name). And thank you to the most precious community that has been known until now as PNC. You are what this is about. Together we have weathered many storms and discovered how present God is in the valleys, dales AND on the mountaintops. Because of you The Dale is a safe place for me too.

It’s a beautiful sunny day, I’m standing in an aisle of Canadian Tire and WHAM, it hits me: my Dad is really gone and has been for 5 years. I guess it’s the weird rubbery smell that reminds me of my Dad- my Dad who kept things meticulously and found much of what he needed to accomplish this at Canadian Tire. It could be that I am reminiscing about how he kept up his car and the Armor All is staring me in the face. I’m not really sure, except that what I call the “wave of grief” is threatening to turn me into a weepy mess right beside the nice 18 year-old in a work uniform who thinks I just want to wash my car.

I excuse myself and head for the door. Then it’s like the domino effect: I think of others who are gone too, of broken relationships, of friends who are here, but struggling to survive. I consider the many injustices of this world. I reflect on all that is broken in my own life and I just want to fix it. I become desperate for relief from the grief, but know that the only way through is to ride the wave. I have to weep. I have to pray. I have to be alone.

In the quiet I can hear a dear PNC friend asking me this: “I’ve squandered most of my life away. I’ve hurt people. I’ve hurt myself. What can I possibly do now to not squander the remainder of my life?” This question rises up out of the raw grief that she feels almost every moment of every day. I didn’t know how to respond at first. My feeble response was this: I think that trying to love well is the only thing any of us can do.

I can’t fix any of this. I can’t bring back my Dad. I can’t get all my friends off the streets. Nor can I ignore that justice is lacking in this world and do nothing. Jesus said the two greatest commandments are to love God and love your neighbour. Easy? No. Is it the only thing that will make a lasting impact? Yes.

I will never get over my “griefs”. How can I get over the people I have lost? In a funny way the incident at Canadian Tire is actually a gift: it helped release a whole load of pent-up emotion, brought back memories I don’t want to forget and made me long for death to be put to death. Grief is something I can hold tenderly and face when it draws so very close. Grief reminds me that what abides is faith, hope and love.

But the greatest of these is love.

The other day I was told by a woman that I make a good “mom”. This women, many years my senior and who no longer has any family of her own; this woman, whose capacity is so real and yet hidden under years of neglect, abuse and mental health issues; this woman who sometimes can’t keep my name straight (occasionally I am called Annabelle); it was this woman who was telling me that I now function as a kind of mother to her.

It nearly reduced me to a puddle of tears on the floor. Some of the tears were born out of a real sense of gratitude: I felt humbled and moved. I will confess that some were the result of fear. How can I be a mother to her? What if I fail terribly and let her down the way she has been let down countless times before? I’m too young! I’m too inexperienced! I’m too much of a mess myself!

Throughout Scripture God is described as a “Father of the fatherless and protector of widows” (Psalm 68:5). God sees “the trouble of the afflicted; considers their grief and takes it in hand. The victims commit themselves to God; God is the helper of the fatherless”. (Psalm 10:14). As image bearers of God, we are invited to be a people who do justice, love kindness and walk humbly. Our utmost calling is to love God and love our neighbour, including the motherless and fatherless. I know, whether I feel up to it or not, this call is extended to me. It is extended to us.

One of the biggest challenges is to not just take care of those who look and act just like us (though those who are like us shouldn’t be left out either). My friend has been rejected by most for being “other than”. I have watched people move away from her on a relatively empty streetcar and wince at how accustomed she is to such a response. I need to consider the grief in her life, take it tenderly in my hand and get off the streetcar with her. The other challenge is to allow ourselves to be willing recipients of love: love is for all of us to give AND receive. This friend is not just asking me to do things for her; she is asking for the opportunity to do things for me. I can’t be a mother without her being a daughter.

So, I’m planning on picking myself off the floor and trying to be a mother to the motherless. I know I will sometimes fail. I’ll just try again. Kind of like how my friend repeatedly calls me the wrong name. I’ll correct her, we’ll give each other a hug and then carry on. 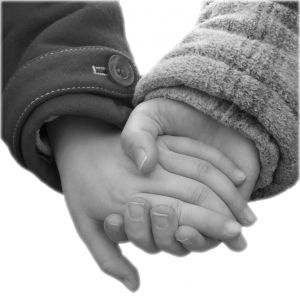